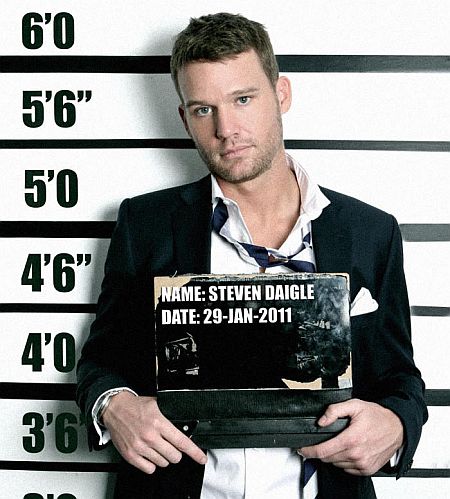 Former Big Brother contestant Steven Daigle finds himself once again at the heart of another media scandal. The 37 year old self-made business man, is the victim of a leaked sex tape which seemingly shows him seducing a potential business client and blackmailing him for sexual favors. Shortly after the footage found its way onto YouTube last week Mr. Daigle was arrested and taken in for questioning. However he was released only a few hours later pending further investigation, with no charges made against him. Although Mr. Daigle has made no official statement, he strongly denied the allegations to the press yesterday morning, claiming that it clearly not him who appears in the grainy video footage and that this is nothing more than a cheap stunt for attention by the perpetrators. Mr. Daigle further insists that whoever is responsible will be brought to justice and his name will be cleared. Watch press interview here http://www.youtube.com/watch?v=XHh078ZH-8M

The supposed victim in the amateur recording, who cannot be named for legal reasons, has also denied to make any official statement. Meanwhile the video footage in question still remains on YouTube, despite all efforts from Mr. Daigle’s lawyers to have it removed. http://www.youtube.com/watch?v=XunR-d0yims . Furthermore it has been rumored that more explicit footage could leak this week suggesting that this case is only just beginning and Mr. Daigle may have a lengthy and unpleasant battle ahead of him.