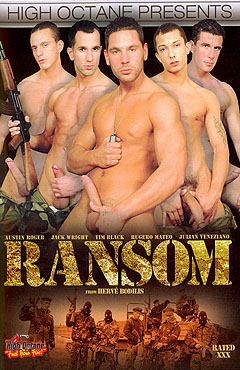 Buffed soldiers guarding an isolated prisoner of war safe house release pent-up sexual tensions by taking indecent liberties with captives and one another.

Put Ransom on your must-see list if you enjoy uniformed men in military action. Buffed young dudes on guard duty at a remote prisoner of war safe house release pent-up sexual tension by taking indecent liberties with captives and one another. Its like watching an isolated band of soldiers who missed the memo about don’t ask, don’t tell.

Handsome army doctor Glenn Santoro rides in luxury in a heavily armored stretch limo enroute to the compound to administer physical exams. He treats trusted aide Rugerio Mateo to a slobbery blow job then gives up his muscular butt for some industrial strength man fucking, first doggy style then with Santoro sitting on Mateo’s big pole and finally in a sideways fuck. His camo pants still bunched around his ankles, Mateo’s hips go into overdrive, pounding into Santoro’s beefy rear at a manic pace. From inside the limo highway traffic can be seen whizzing past. The drivers of those cars would be treated to a road hazard of a sex show were it not for tinted privacy windows. After Santoro spews a creamy batch on himself, Mateos stiff boner springs out of the hole it’s been plugging to unload a bucketful on Santoro’s hefty thigh.

At the compound Jones greets longtime bud Santoro with a bear hug. As the doctor prepares for the exams, Jones tends to unorthodox hospitality chores with two captives, Evan Rochelle and Kevin Cage. They join the commandant in his plush office, where Jones lies spread eagle on a fold-open couch with pants at his knees, stroking his thick, hard cock and smoking a stogie. Brandishing a riding crop for emphasis, Jones orders them to suck each other while he jacks off. He has the captives join him on the bed to stuff his mouth and ass with their ample manhood. Jones keeps his officers cap on while sucking and getting fucked. The way he orders them around and commands the two studs to have their way with his eager hole gives new meaning to the term, power bottom.